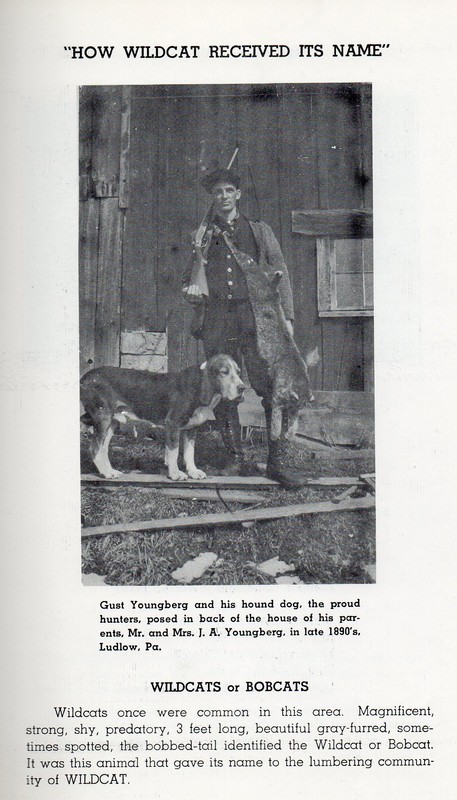 In 1922, the Ludlow Athletic Association purchased 6.16 acres of land in Wildcat to be used as a baseball diamond. Additions to the original purchase were made and 10 acres of land were set aside for the ball diamond proper, and by 1924 this plot was completely graded. The possibility of extending the acreage and of making a community park was readily seen. And so the original baseball diamond really became the nucleus of the present Wildcat Park.

The Ludlow Community Association was incorporated in September, 1925, with fifty-one charter members, " For the purpose of promoting wholesome and healthful sports and recreation and for the social and general welfare of the people residing in the village of Ludlow and its vicinity, and for that purpose to maintain suitable grounds, buildings and equipment for the use of its members."

In 1924 the park saw very extensive improvements under way. Two Mile Run was changed by making a new channel. This was done to provide a suitable location for the new bridge which was to be built over the run. The bridge, donated by G. W. Olmsted, is a concrete structure 28 feet wide with a 30-foot span. A gravel road was then constructed crossing Two Mile Run at this point. The water system was installed in 1926. This project consisted of the installation of eight small hydrants with pipe lines connecting them with the spring on the premises. The playground equipment, consisting of swings, bars, rings, slides, and sand boxes, were donated by the Girl Scouts.

The Shelter House was erected in 1928, a gift of Walter Lloyd of Montclair, New Jersey and the Grand Stand was presented to the Park by Nathan P. Cutler.

The Ludlow Community Association was presented with a beautiful entrance gate and gate house in 1929 by G. W. Olmsted. In the same year, the American Legion, James Uber Post No. 489, erected the exit gate as a memorial to those who fought in the World War. In 1930, two clay tennis courts were constructed. Eight large natural gas hot plates were installed at various places in the park and electric lights were installed in the park buildings and main entrance. Two years later saw two bath houses erected and nine additional tennis courts begun.